Our lab addresses a wide range of questions related to the ecology and evolution of small populations and the indirect effects of humans on bird, mammal and plant populations.  Our island ecosystem offers a large range of study sites that allow us to document the direct and indirect impacts of human land use and commensal species and the persistence of small plant and animal populations, and to develop management plans to ameliorate these effects on biodiversity loss.  Ongoing work in our lab address questions about the influence of inbreeding and small population size on individual and population fitness, the dispersal strategies of birds and mammals, the effects of land use on the persistence of native plant populations, and the integrity of native plant communities and spread of invasive species. Our research takes place over study periods stretching from 1 to 100s of years via the use of museum specimens, stable isotope analysis and historical landscape reconstruction using traditional knowledge and historic land cover data.

Individual projects are described in more detail under the appropriate projects section:

Biogeography of meadow patches on Vancouver Island and adjacent islands

The scattered meadow patches on Vancouver Island and adjacent islands are among the most floristically diverse and fragile ecosystems in Canada.  They are isolated fragments, threatened by development and invasive species.  Preservation of their floristic diversity depends on understanding the roles of factors such as dispersal barriers, environment and disturbance in determining species composition and dominance.  Since the patches are vastly different in their species composition, from nearly pristine to heavily degraded and invaded, they offer a natural laboratory to study such factors, and to determine how best to preserve native diversity.  Our work compares over 80 meadow patches, looking for ways to preserve them, and answering theoretical questions about species composition in habitat fragments that are applicable to fragmented ecosystems worldwide.

A key question in ecology is what constitutes a “normal” change in animal population numbers, because failing to do so can result in inappropriate management responses to population declines or increases based on monitoring data collected over short time-frames. Despite the importance of historical baselines to quantifying human impacts on ecosystems, we have a very limited understanding of how food webs have changed over time given that short-term studies may not represent the magnitude of historical change. Developing tools to describe historic ecological change has the potential to enhance our predictions about future ecosystem states and reducing the likelihood of inappropriate management responses based on narrow interpretations of short-term data. Developing baseline scenarios should also contribute fundamental understanding about how ecosystems respond to perturbations, thus improving our predictions about the limits of ecosystem resilience.

Historical ecology focuses on changes in ecosystems and animal populations over decades, centuries and even millennia. To describe long-term ecosystem change, we use several approaches including field studies, meta-analyses of modern and historical studies, ecological modeling and isotopic analysis of museum specimens. Common organisms for which historical abundance data are already available can be ideal species for this work, particularly when long-term population fluctuations in their populations can be reasonably linked to well-understood ecological processes and/or environmental change. Historical ecology has the potential to engage societal interest in conservation as it combines history with biology, an approach that has broad public appeal. Our research focuses on long-term patterns of change in bird populations and plant communities of local coastal and marine systems. Recent examples include:

Blight (In review). Breeding effort of a coastal seabird, the glaucous-winged gull (Larus glaucescens), declines with increased human footprint. (Link to this project.)

Jewell & Arcese. 2008. Consequences of parasite invasion and land use on the spatial dynamics of host populations. J Appl Ecol 45:1180.

Our lab goes beyond the study of interrelationships between organisms and their environments. As ecologists, we search for ways to apply our knowledge to species and ecosystem conservation, and to the recovery of threatened populations. One focal species is the Vancouver Island marmot, a critically endangered ground squirrel found only in subalpine talus and meadow pockets of Vancouver Island. Our research considers the fate of over 300 captive-bred marmots that were released into the wild between 2003 and 2010. We are using predictive modeling to identify the habitat conditions most likely to result in site fidelity, based on environmental measures of predation risk and forage availability. We are also investigating how site fidelity and survival vary with social context of release groups, and with release procedures themselves. Our results will influence choices about the location of future release sites and the individual traits and composition of marmots to be released, and should lead to a more rapid establishment of a stable and wild Vancouver Island marmot population. 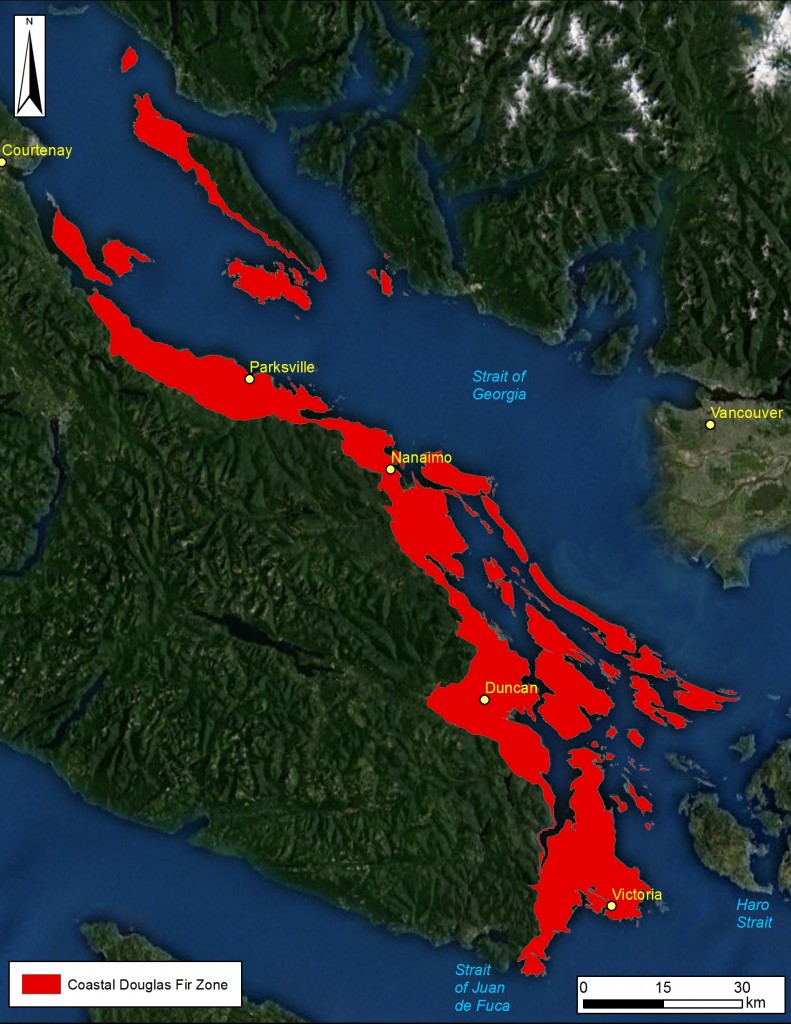 British Columbia, with over 60% of its total range converted to human use. To date, conservation planning in the CDF has been conducted opportunistically and has not yet taken advantage of newer approaches to systematic reserve design now being used for marine and terrestrial conservation planning in the Georgia Basin and BC Central Coast, respectively. Systematic planning software and approaches aim to optimize biodiversity gains based on limited funds available for land acquisition. As only about 16% of the land base in the CDF is publically-owned, establishing cost-efficient mechanisms to acquire sufficient forest habitat to conserve viable and relatively contiguous populations of CDF bird communities is extremely challenging, but might be facilitated if carbon offsets can be used to supplement land purchases, as BC Parks recently demonstrated on Denman Island.

Our research aims to catalyze conservation in the CDF by providing predictive distribution maps for many highly-valued bird and plant species, and by finding economically and biologically efficient solutions to land acquisition and protection using systematic planning software and carbon offset values to facilitate conservation. We are using Marxan to explore cost-efficient approaches to restore ‘old-growth’ coastal Douglas fir ecosystems using a mixture of covenant and land purchase agreements, facilitated by carbon offsets based on stand-level forest growth models. Our results will provide novel solutions to conservation area design in the CDF to enhance persistence of valued species and communities and to provide immediate guidance to land use planners trying to maximize return on investment.

The song sparrow study on Mandarte Island was begun by Frank Tompa in 1960 and re-kindled by Jamie Smith in 1975.  Peter Arcese joined Jamie as a graduate student in 1981 and was followed on Mandarte by Wes Hochachka, Alice Cassidy, Lukas Keller, Amy Marr, Katie O’Connor, Simone Runyan, Jane Reid, Kelly Jewell, Scott and Amy Wilson, Rebecca Fell and many dedicated helpers. Contributions by these people have built one of the most detailed databases available for a wild bird population, including a detailed social pedigree of all breeding birds from 1975 to present.  Recently, we genotyped all nestlings from 1993-present to create a genetic pedigree to facilitate our analyses of individual performance, inheritance and inbreeding in the context of demographic and micro-evolutionary processes.  Research on Mandarte Island to the mid-90s is summarized in Conservation and Biology of Small Populations: the Song Sparrows of Mandarte Island (Smith, Keller, Marr & Arcese, eds), 2006. Oxford University Press, New York.  Recent projects are outlined briefly below.

Estimating the Cumulative Impact of Brood Parasitism on Passerines: 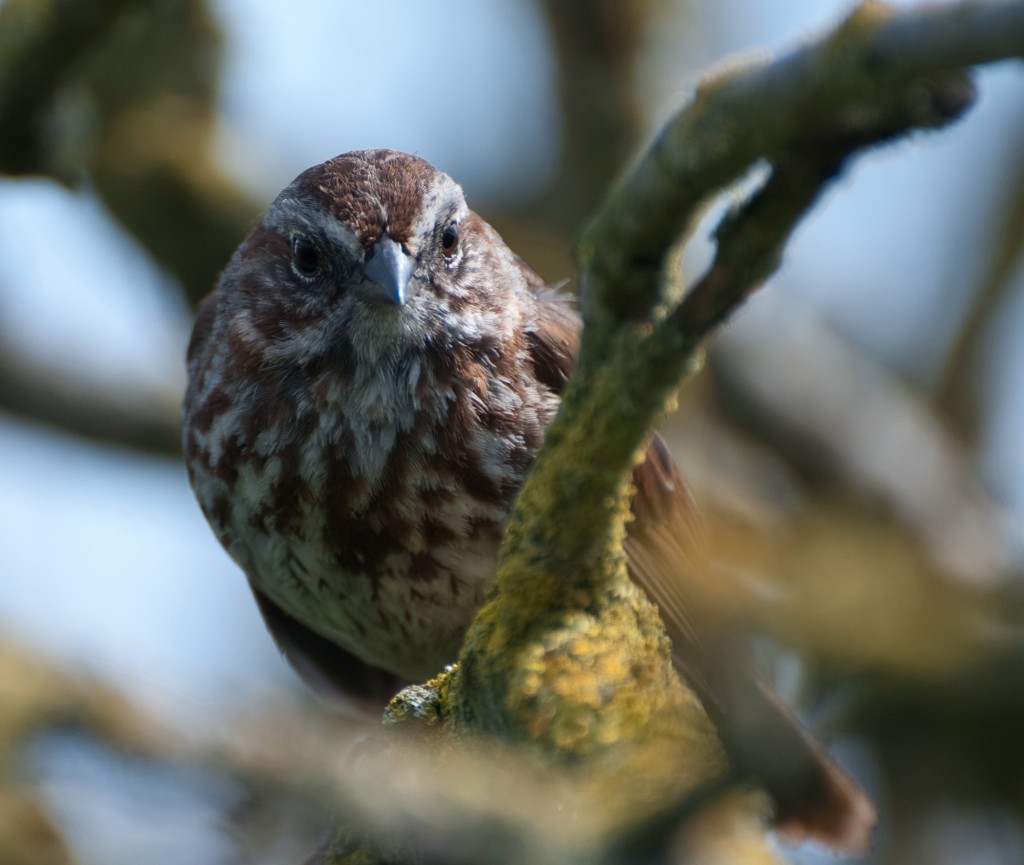 Early analyses of the Mandarte population revealed that Brown-headed Cowbirds have their main deleterious impact on hosts via nest depredation as opposed to brood parasitism (Arcese et al. 1992), giving rise to the hypothesis that nest depredation is an evolved strategy to facilitate re-laying by hosts and maximize the number of nests available for parasitism (Arcese et al. 1996).  Subsequent studies show that these deleterious effects of cowbirds on song sparrow hosts can be extrapolated to the landscape level to understand long-term population declines in the Georgia Basin as a consequence of land use change and cowbird invasion of the region after 1960 (Wilson & Arcese 2006, Jewel & Arcese 2008). Future work underway by Richard Schuster (PhD candidate) and Dr. Tara Martin (CSIRO, UBC) will expand these approaches to other host populations of interest to conservation to create regional plans for the maintenance of robust native bird communities.

Meta-population dynamics, genetic differentiation and dispersal: By applying techniques developed on Mandarte to other islands in Georgia Basin our lab has demonstrated the stabilizing influence of dispersal on small populations, identified sex-specific mechanisms of dispersal (Wilson & Arcese 2008), and characterized the contribution of island populations to the conservation of genetic variation and the influence of barriers to dispersal on genetic differentiation (Chan & Arcese 2002, 2003, Pruett et al. 2008, Wilson et al. 2008).

Inbreeding, Individual Behavior and the Evolution of Avian Mating Systems: 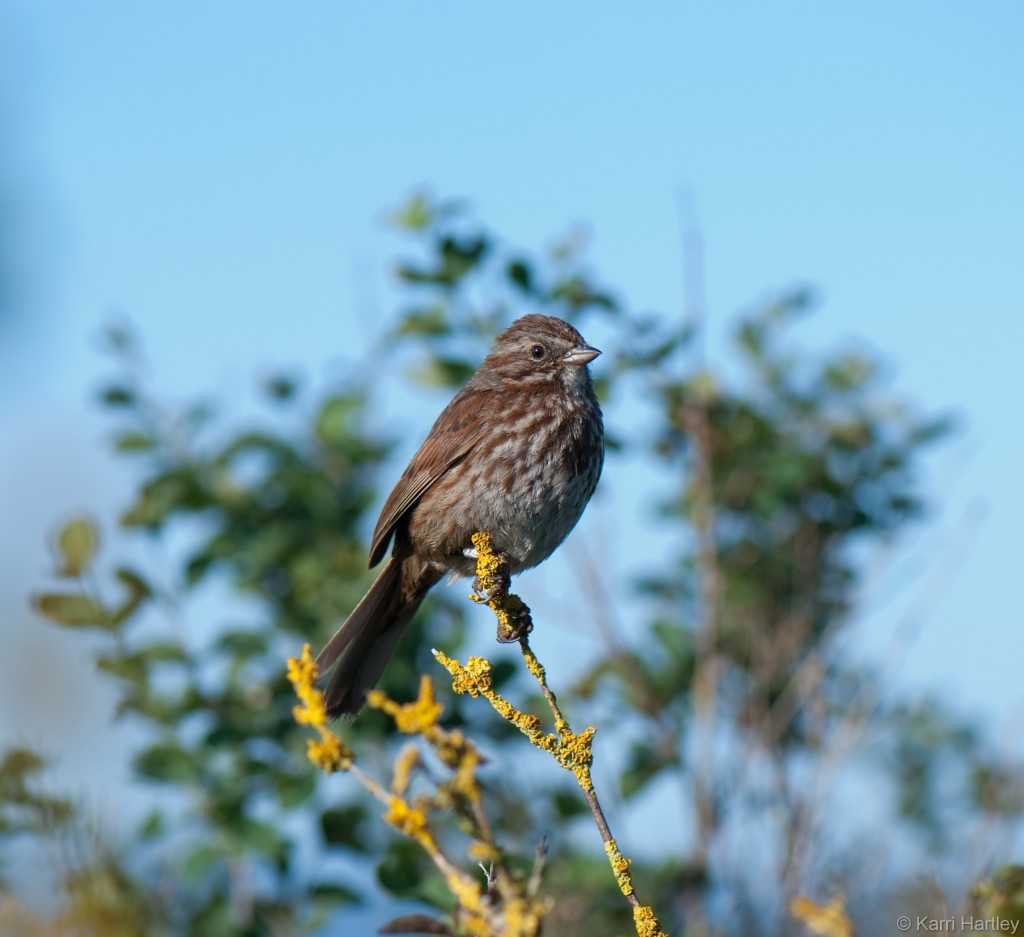 Following the pioneering work of Lukas Keller, our research on the influence of inbreeding continues to document its importance on individual performance, population growth and the evolution of individual mating tactics (Marr et al. 2002, Smith et al. 2006).  Currently, Jane Reid, Lukas Keller and colleagues are focusing on the physiological and life-history causes and consequences of inbreeding, and the role that inbreeding avoidance may play in mate choice.  Read more about Jane’s recent work here.  Lukas Keller also provides the backbone of our genotypying efforts on Mandarte, now focusing on the development of quantitative trait loci. Read more about Lukas’ work here.